Tool- and mold-making work group: The network for the sector

To bring science and industry together – that is the goal of the tool- and mold-making work group (AKWZB). The members meet three times a year for lectures, discussion rounds and to exchange their experiences.

The tool- and mold-making work group (AKWZB) is a network to exchange experiences and trainings for companies and departments of  tool and mold making in Germany. The participants of the work group are CEOs, Heads of Departments and managers from that sector. It was founded in 1997 by the IPH – Institut für Integrierte Produktion Hannover gGmbH.

The goal of the work group is to connect industry and science, to share knowledge and to drive innovation.

Image film for the work group

The tool- and mold-making work group (AKWZB) unites science and industry by offering lectures, discussion rounds and the exchange of experience.

How the members benefit from the network is shown in this video: 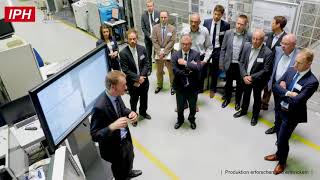 The joint toolmaking working group of IPH Hannover and VDMA Werkzeugbau met for a workshop at Stiebel Eltron in Holzminden. New topic plan is more strongly oriented towards the interests of the younger members.

The future has already begun at the AKWZB: thematically and in terms of personnel. The first working group meeting, directed by the two "newcomers" from IPH Hannover, Yorck Hedicke-Claus and Eugen Seif, took place on 21 March 2019 at Stiebel Eltron in Holzminden. Eugen Seif was pleased about the increasing interest of younger entrepreneurs and managers from the toolmaking industry: "We now see a trend among younger decision-makers to network more closely and work together on future topics.

The main focus of the working group meeting at Stiebel Eltron was a workshop to draw up the theme plan for the upcoming events, because at AKWZB the participants determine the course. The collection of topics resulted in a broad spectrum of challenges that the internal companies will have to face in the near future. "Typical issues that are important in succession processes were also placed on the AKWZB agenda by the participants," informed Yorck Hedicke-Claus.

The participants were very impressed by the establishment of Stiebel Eltron's internal resource construction. During the plant tour, it was possible to see what a company can achieve when it consistently relies on the competence of the toolmaking department as an enabler of the entire production.

The next working group meeting is planned for the second half of the year in September. The topic of the meeting will be the digitalization in toolmaking, for example by using AI in design and process monitoring. The organizer and date of the meeting will be announced on the AKWZB homepage as soon as possible.

Event partner Alfred Graf Zedtwitz of VDMA Werkzeugbau invites interested entrepreneurs and toolmakers to attend: "Guests - especially younger ones - are welcome to attend AKWZB on a one-time trial basis. Please contact the organizers for this purpose".

Look back: Jubilee event on the occasion of the 20th anniversary of the working group 20 years of the The tool- and mold-making work group (AKWZB): In 1997 the AKWZB was founded at the IPH, on 27 September 2017 the anniversary celebration took place there. The program included technical presentations, a panel of experts and a guided tour through the technical center of Engel Deutschland GmbH. A detailed report can be found at www.form-werkzeug.de.

With the support of